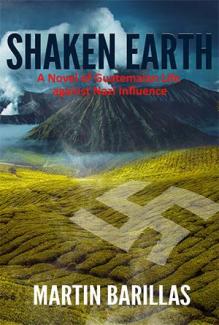 A Novel of Guatemalan Life Against Nazi Influence

EXCRUCIATING DETAIL. The excruciating detail in this story, with two parallel narratives, is the mark of an author who has both studied and lived these places. Barillas tells the tale through the thoughts of a young Guatemalan woman undergoing a troubled marriage, and then through a US travel writer who gets on the boat to Puerto Barrios-and then seeks to explain the tropics to her readers back in North America.”

Shaken Earth is the first novel by Martin Barillas and is inspired by his love for his family’s native Guatemala. Set in the turbulent early 1930s, this small country is the scene for an epic tale where seemingly small decisions lead to explosive consequences that will affect everyone’s lives forever.

The book opens with the story of a young married couple who seek to remain in the country they love, Guatemala, but are forced to choose exile and flight instead of the leisure of a stable home. They cannot escape the seismic changes underfoot in the world, which witnesses the rise of Adolf Hitler in Germany, whose fingers reach as far as the coffee plantations of Central America.When an earthquake and volcanic eruptions set Mariano and Soledad back on their heels, they are crushed by family betrayal. They come to rely on unexpected resources and allies, such as an errant priest and a down-on-her-luck writer, as they attempt to rebuild their lives while immersed in a whirlpool of international intrigue, revolution, and genocide.

What People are Saying...

UNFORGETTABLE. Shaken Earth’s distinct level of erudition and attention to historical detail pulls in the strands of American business, Nazi eugenics, and political intrigue. Shaken Earth boldlycomes to grips with the outpouring of humanity from Central America fleeing generations of want and oppression." Edwin Black, author IBM and the Holocaust

COMPELLING. The era about which he writes was still within their living memory and the result is a highly compelling tale that evokes the flavor of a specific time and place – one that intersects with American history, as well."
The Cutting Edge News

Martin Barillas is a former US diplomat, serving in Europe and Latin America, as well as with the division for Politico–Military affairs. At the latter, he was granted the Meritorious Honor Award for valuable services rendered in the Office of International Security Operations. He was co-author of Hidden Killers, a report to Congress concerning the threat of landmines and ordnance to civilians.